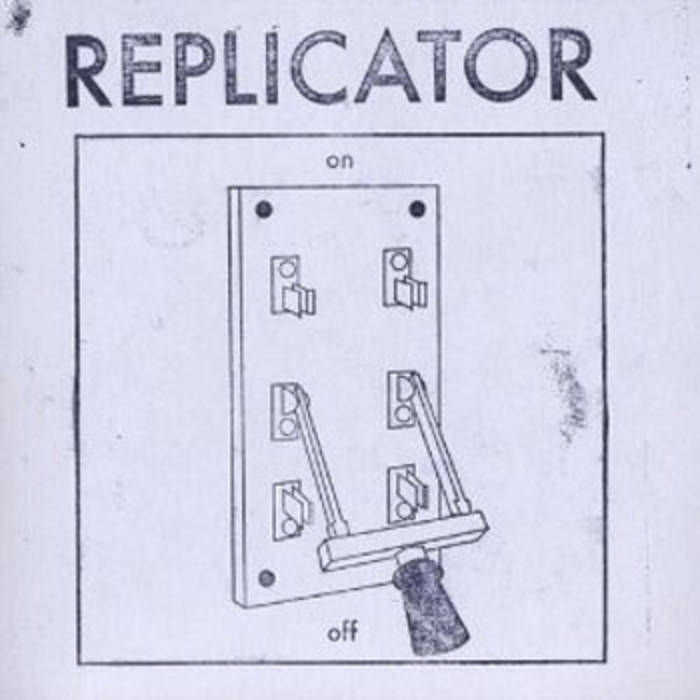 talia wagner there of the best songs they ever did. Favorite track: Baby, I Want To Terraform Your Planet.

There’s something to be said for a terminus, closure, for having the guts to push the button and set the self destruct active. End it on top, before the inevitable slide into self parody and hackery. Oh, how I wish I had the power to make other bands do the same.

In a sense this band could not have existed at any other time, the end of the world always seemed right around the corner, yet things just kept grinding on in increasingly goofy and scary manner. Replicator arose during the era of the iPod, the internet, and when cell phones went from a novelty to a near necessity. Mediocrity and fear held sway, usually at the same time, and when we were written about we were called paranoid, and/or chaotic.

The fact of the matter is this band was always reflective of the world around us, albeit through our warped and runaway allegorical perspective. It wasn’t so much paranoia, as a cracked mirror and if we brought the chaos, it’s because the world itself did a pretty good job of bringing it too.

We were never the kind of band to follow a trend, or do what was popular, in fact our timing seemed to always be a bit off, and we never really offered what people wanted. Every once in awhile it was what they needed though, which is different.

Stubborn as a mule and making music just about as ugly, we always did our thing with 100% enthusiasm and intensity. If you were into it, great! But it existed without outside approval or desire, a shambling, spasmodic beast that dragged itself along without outside provocation. Flawed? Perhaps, but never insincere.

I never told people I “played in a band”, I played in Replicator.

Not everybody got that, but it was an important distinction, as this band was a family and tried our hardest to be an uncompromising force of nature. I feel absolutely overjoyed to have spent every second with these fine gentlemen, my brothers of different mothers, putting together something greater than the sum of its parts.

Look: We never fit anywhere easily, and in fact, the only places we did fit in are the places that we forged ourselves with the other ones that were the last ones picked. The freaks, nerds and weirdoes that didn’t fit in with the cool kids, but didn’t much give a damn either. See, it turns out the cool kids were all insecure and really weren’t that cool anyway. Besides we outlasted most of them, and outclassed even more, so we won by default.

Here's where the words go:

Baby, I Want to Terraform Your Planet is one of the last Replicator songs we wrote, it's a hint of what could have been and an extension of the emerging "big rock"-Replicator style era that appeared on Machines Will Always Let You Down. Atmospheric terraforming as an allegory for sexual relations? Why not?? We never wrote a love song, or had a song about a relationship, absurdly, this is probably the closest thing to that we ever did.

The "Moby Dick" style drum solo was designed to go on for variable lengths, however long Chris felt like playing it. This meant that the rest of us could leave the stage, get a drink... run a lap around the venue, whatever, and get back in time for the next part.

That was Replicator for you; to us that kind of thing was just as exciting as the music itself.

Arhur Jermyn is a BABYLAND cover, if you don't know them, you should. They were one of the 10 or so bands that all 3 members agree were amazing. Their integrity, pure sense of mission, powerful live performances and overall awesomeness is truly something to behold, and they've always been an inspiration. If the world of playing in a band is a battlefield, BABYLAND would have been one of our trusted and most valued allies. They got it exactly right.

Arthur Jermyn is an interesting dude. Sometimes finding out the truth of what you are is too much to take.

Barely Regal is the last Replicator song ever, another example of what could be, but with a slightly different direction. Spaced and inexorable, it appears to be about what to do with unearned power, fame and celebrity and also what it feels like to know that there is no escape, everything blowing up all to holy hell, but that's ok.

Ahh, conflicting themes that sort of work themselves together in the end through twisted and sometimes convoluted logic, also very Replicator.

It will be Majestic.

We had a good run; we far exceeded all our wildest expectations, and then some. We saw places we never would have seen otherwise, met people we never would have met otherwise, and had experiences that will last a lifetime, and make for some very funny anecdotes later in life. (Tragedy+Time=Comedy). We did our best to give back the ass kicking that music had given to us, and hopefully touched a few lives in the process.

Vans were broken, so were glasses. Relationships and credit wrecked, Hearing was damaged.

Good times were had.
-End Communication-

Recording was done at Replicator HQ/House of Collision by the Oakland Coliseum, Ben Adrian recorded everything, I guess you could say I (Neutron) did some tape op work, but there was no tape, and all I really did was push a button. Scott Evans did all of the mixing at the Evans Center for Sleep Deprivation Studies, and was very patient at our many exacting and demanding requests to "turn up the thrang" and eliminate the sucky parts. Matt Lebens helped turn this little project from a sleepy afterthought into a legit release and will always have our eternal gratitude for not only believing in this little band from Oakland, but for bringing the outside enthusiasm that helped us play better and work harder. Thank you for everything Matt.